Where to Start? Part II

Okayyyy, so I totally didn't expect it to take this long to write my second blog post.  After extended contemplation, I have listed all of the reasons for this delay in order, creating a weighted score based on importance, frequency of occurrence and elapsed time:

Now that we got that out of the way, on to part two!

I mentioned how there are instances where you want to change your shutter speed, aperture and ISO settings, even though you end up with the same exposure.  To show an example of this, I picked a photo from a contest that is perhaps the ultimate in sports competition.  Of course, I'm talking about the Dizzy Bat Race between innings at the Cal baseball game.

For those unfamiliar with this King of Sports, two contestants place the fat end of a bat on the ground and place their forehead on the handle end of the bat.  They then do ten revolutions around the bat, making the contestants somewhat dizzy.  After the ten spins, they run towards the finish line, usually in an inebriated-like state.  The first one to the finish line is the winner.  Fun is had by all.

I was at the Cal game on Saturday and this is one of the shots that I ended up with: 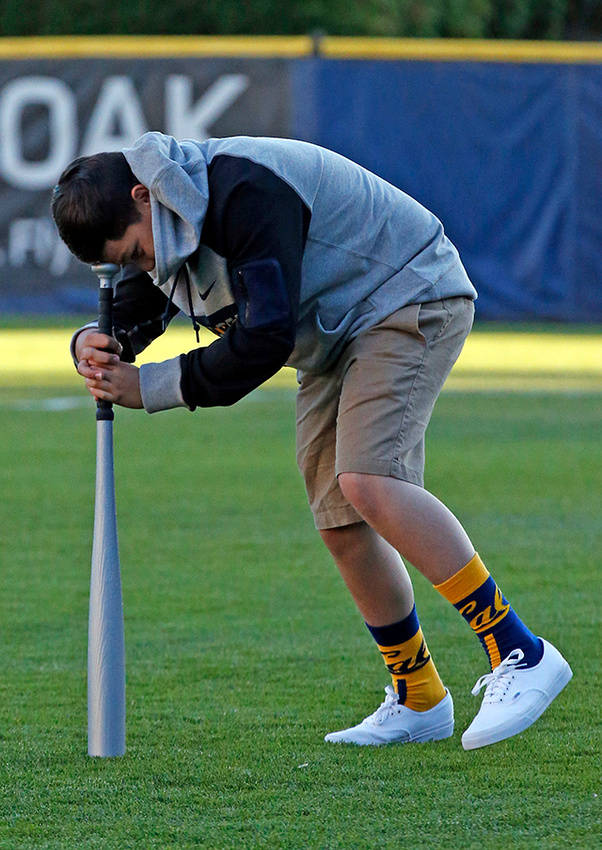 While this correctly shows the proper form for the game, there's not much here to know what's going on and it's a rather unremarkable picture.  I returned to Cal on Monday and another Dizzy Bat contest was held.  I thought about how to improve my first attempt at capturing the image of these regal competitors and came up with an idea.  How about slowing down the shutter to get some motion into the shot?  Additionally, I noticed that they had the contest on the big scoreboard, so getting that in the shot would help explain things as well.

Since the contest already started (I need to come up with these ideas a lot faster next time), I quickly lowered my shutter speed to get motion blur (bringing in more light), closed down my aperture to get more of my scene in focus (less light) and went into Auto ISO mode (because it was revolution #8 out of 10 by the time I finished changing my first two settings).  At this shutter speed, it was difficult to get a non-blurry background, so this was my best attempt:

And I will be the first to tell you that this shot will not win any prizes, nor does it accurately depict the majesty of this battle.  If I had time to set everything up, I would have gone back to my car to get my tripod and set my shutter speed at something like a 1/2 second to get more motion in the shot.  I also would have asked the second baseman that was warming up between innings to get out of my shot.  However, it is a good example of why I would want to change my settings to come up with relatively the same exposure.

So, was it worth the wait to get the answer to my question in the first blog post?  I'm guessing not. =P

Keywords: basics, how to